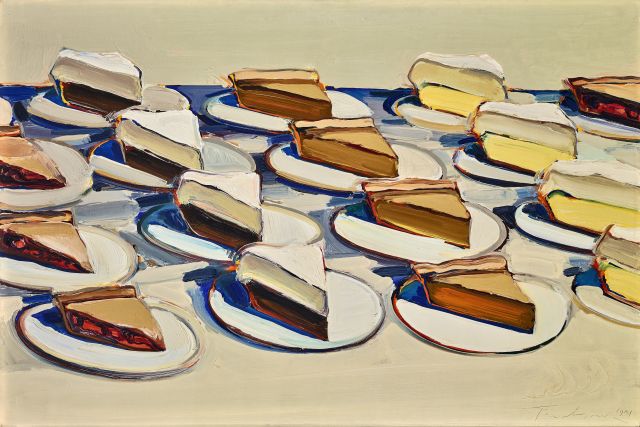 A sweeping retrospective of a legendary American artist’s career, Wayne Thiebaud 100: Paintings, Prints and Drawings, will open at Toledo Museum of Art on Feb. 6, running through May 2, 2021. In celebration of Thiebaud’s 100th birthday in 2020, the exhibition brings together works from the Crocker Art Museum in Sacramento, California, as well as works from the Thiebaud family, many of which have never been publicly on view.

Known primarily for his colorful and captivating depictions of cakes and desserts, Thiebaud has also explored still lifes, figural studies, landscapes and urban environments. Wayne Thiebaud 100 is curated by Scott A. Shields, associate director and chief curator at the Crocker Art Museum, which has collected the artist’s work since early in his career.

“Wayne Thiebaud’s works are a visual feast and highly accessible, which means they will appeal to audiences of all ages when this exhibition opens in Toledo,” said Diane C. Wright, TMA’s interim director of curatorial affairs. “Yet when you look closely at Thiebaud’s paintings, prints and drawings, you see that they are so much more than realistic depictions of food and everyday scenes. They are layered with his personal interpretations and feelings about the human influences on objects and places that might otherwise be ordinary, but in his hands become something more.”

The Crocker Museum has hosted a Thiebaud exhibition every decade, beginning with the artist’s first solo show in 1951. Drawing on the Crocker’s extensive Thiebaud holdings, Wayne Thiebaud 100 will showcase the full range of his work in painting, prints and drawings. The Toledo Museum of Art

“Pies, Pies, Pies,” one of Thiebaud’s most iconic works, is emblematic of the style he is most known for; a familiar dessert laid out tantalizingly on a diner counter. It showcases his fascination with the man-made; each slice of pie has been meticulously processed and manipulated to tempt us to enjoy it. But Thiebaud also explored still lifes of single objects, like his “Watermelon with Knife,” which differ greatly from more traditional, multi-object still lifes. In his depictions of human figures, like “Betty Jean Thiebaud and Book,” Thiebaud stays closer to the realism of his subject yet still layers his interpretation of time and personal history onto the figure. His city scenes, which he conceives through an assembly of sketches that he combines into fully realized paintings and prints, showcase intimate details that imply human presence and impact, rendering what could be a scene of isolation into something deeper.

With his use of bright colors and patterns, and his depiction of quintessential post-war consumer culture, Thiebaud is often categorized as a Pop artist. However, his interest in a sumptuous painterly technique – rather than mechanical reproduction and serialization – sets him apart from traditional Pop artists like Roy Lichtenstein and Andy Warhol.

Born in Mesa, Arizona, in 1920, Thiebaud moved with his family to Southern California as a young child. His early experience as a professional artist included drawing for Walt Disney Studios and the U.S. Army as a cartoonist. He subsequently received his Bachelor of Arts and Master of Arts from California State University, Sacramento, and went on to teach art for more than 30 years at the University of California, Davis. Thiebaud’s work is included in major museums and institutions throughout the U.S. and has been the subject of numerous exhibitions. In 1994, President Clinton presented him with the National Medal of Arts award, the highest honor awarded to artists and patrons of the arts by the United States government.

Wayne Thiebaud 100: Paintings, Prints and Drawings is accompanied by a 212-page book of the same title published by Pomegranate. The publication includes illustrations of the works in the exhibition as well as additional background and photographs of Thiebaud and those who informed his artistic legacy.

Wayne Thiebaud 100: Paintings, Prints and Drawings is organized by the Crocker Art Museum, Sacramento, California. The exhibition is sponsored locally in part by 2021 Exhibition Program Sponsors Taylor Cadillac and ProMedica with additional support from the Ohio Arts Council, the TMA Ambassadors and the Rita B. Kern Foundation. Admission to the exhibition is free for Museum members and $10 for nonmembers. Discounts for military and seniors ($7), college students and youth ages 5-17 ($5) and children four and younger (free) are available.

In addition to these discounts, the Museum is offering a variety of ticket promotions throughout the run of the exhibition. Healthcare workers and first responders may receive one free ticket to Wayne Thiebaud 100 with proof of ID from Feb. 6 through May 2. On Friday, Feb. 12, and Saturday, Feb. 13, from 5 to 8 p.m., visitors can buy one Wayne Thiebaud 100 exhibition ticket and get one ticket of equal or lesser value for free. Finally, youth ages 5-17 can visit Wayne Thiebaud 100 for free April 2-11.