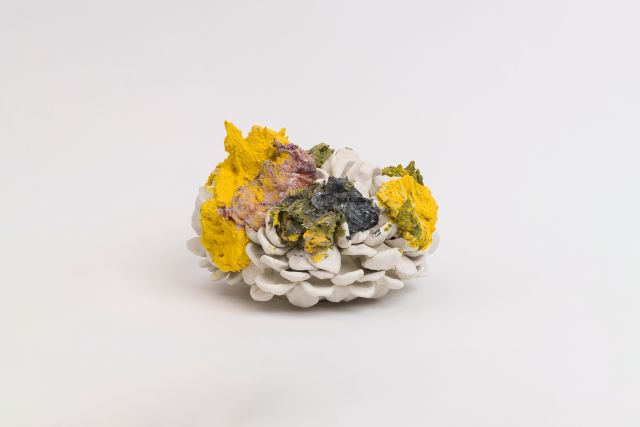 Monumental, colorful and expressive, Matt Wedel’s ceramics are a full celebration of what is possible with clay.  On view at the Toledo Museum of Art (TMA) from Nov. 5, 2022–April 2, 2023, Matt Wedel: Phenomenal Debris brings together a large selection of his ceramics and drawings, spanning over a decade of the artist’s career. Wedel is renowned in his field for pushing the boundaries of clay, resulting in objects that recall familiar plant forms while also springing from his own imagination. Matt Wedel: Phenomenal Debris will be on view in the Museum’s Levis Gallery and is the first large-scale solo exhibition for the artist in a major art museum.

This presentation of Wedel’s work at TMA is intricately tied to the Museum’s roots in glass, the “cousin” of ceramics. Both materially fall within the genre of contemporary craft. TMA is home to one of the most comprehensive and historically significant collections of glass art in the world, and was the birthplace of the Studio Glass Movement, where the Museum acted as incubator for experimental glass melting practices that allowed a wider range of studio artists to begin working in the medium — many of them ceramicists.

“Our commitment to broadening the narrative of art history extends to the type of work represented in our galleries,” said Adam M. Levine, TMA’s Edward Drummond and Florence Scott Libbey director and CEO. “Matt Wedel: Phenomenal Debris is a purposeful engagement with contemporary craft, an area of art making as rooted in heritage as it is in the exploration of traditional mediums such as ceramic and glass.”

Wedel’s practice is grounded in the exploration of human psychology. With experimentation playing a pivotal role, he challenges himself to embrace chance, possibility and failure. The resulting works are a story of creation and destruction. In Wedel’s own words, his work is “the phenomenal debris that is shed from being human.”

“This exhibition is an incredible opportunity to share Matt’s work with our audience in the Toledo area and beyond,” said Diane Wright, TMA’s senior curator of glass and contemporary craft, who organized the exhibition. “Defying definitions we often impose on contemporary art, Matt shows us how an artist joyfully expresses his love of material and making while simultaneously prompting serious conversations about community engagement and sustainable living.”

Matt Wedel: Phenomenal Debris is organized by the Toledo Museum of Art and curated by Diane Wright, senior curator of glass and contemporary craft. This exhibition is sponsored locally by season sponsor ProMedica and presenting sponsors Susan and Tom Palmer, and is made possible in part by state tax dollars allocated by the Ohio Legislature to the Ohio Arts Council (OAC). The OAC is a state agency that funds and supports quality arts experiences to strengthen Ohio communities culturally, educationally, and economically.