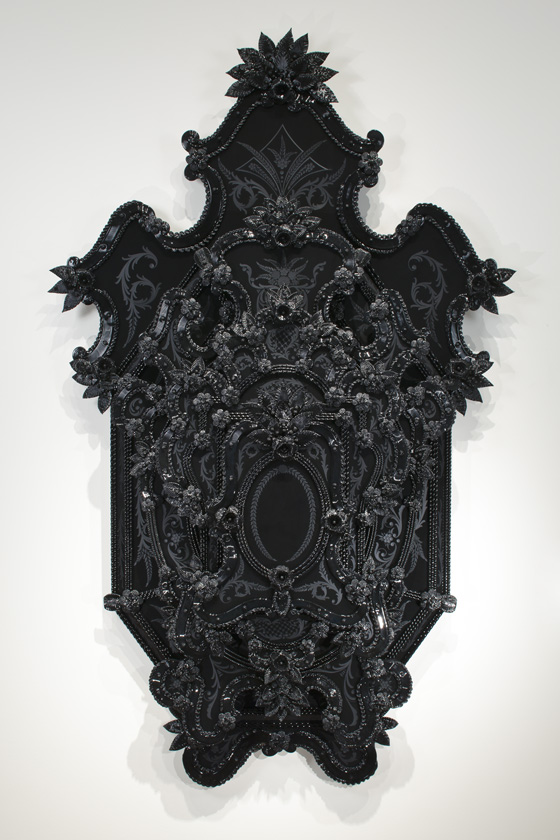 Fred Wilson (American, born 1954), Iago’s Mirror. Black plate glass; mirrored, molded, tooled, cut, and assembled, 2009. 80 in. by 48 ¾ in. by 10 ½ in. Partial gift of The Pace Gallery in honor of Georgia E. Welles and partial purchase with funds from the Libbey Endowment, Gift of Edward Drummond Libbey, 2010.9. Wolfe Gallery.

In Shakespeare’s Othello, Iago attempts to destroy the lives and reputations of all who surround him, particularly the black Venetian officer Othello. It is deliberately unclear what Iago’s motivations are for his murderous vendettas—revenge, bigotry, jealousy, a love of deception?

Iago’s Mirror was made in traditional 18th-century Rococo style by Murano glassworkers in Venice, according to artist Fred Wilson’s specifications. Unlike the pastel colors of its historical models, Wilson’s mirror is entirely black.

In his work Wilson deliberately treats difficult subject matter—often involving perceptions of race and marginalized communities—in aesthetically attractive ways. He says of Iago’s Mirror, “I like the fact that it is beautiful yet not comforting.” The dark, mirrored surface alters viewers’ reflections of themselves, metaphorically echoing Iago’s dark soul and Othello’s themes of manipulation, distorted perceptions, and racial prejudice.