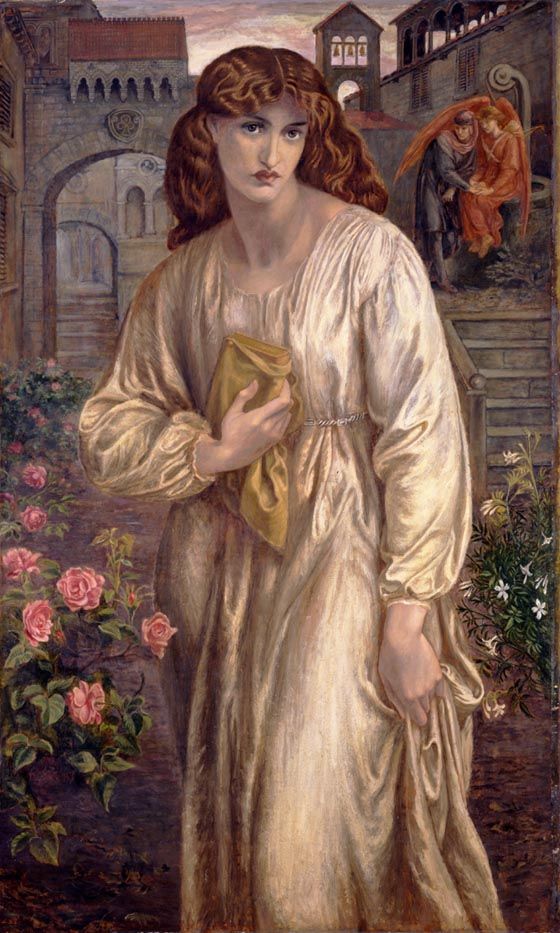 Pale faced, full–lipped, with a thick head of wavy chestnut hair, this image of medieval Florentine gentlewoman Beatrice Portinari embodies the Pre-Raphaelite ideal of beauty. The group of British artists and writers calling themselves the Pre-Raphaelite Brotherhood aspired to an aesthetic based on early Italian Renaissance art and the direct observation of nature, in contrast to what they saw as the overblown and insincere British academic style.

Rossetti found a rich source of inspiration in the works of his namesake, thirteenth-century Italian poet Dante Alighieri. In 1861 Rossetti published a translation of Dante’s Vita Nuova (New Life), a series of autobiographical sonnets detailing Dante’s unrequited love for Beatrice Portinari. The Salutation of Beatrice illustrates lines from the second sonnet in Vita Nuova, which Rossetti inscribed on the gilded frame he designed specifically for the painting: My lady looks so gentle and so pure / When yielding salutation by the way / That the tongue trembles and has naught to say / And the eyes, which fain would see, may not endure. Beatrice walks toward us, dominating the composition, while Dante, in the background, is sheltered and comforted by the red-robed figure of Love.

Rossetti’s model for Beatrice was Jane Morris (1839–1914), wife of his friend the artist and designer William Morris (1834–1896). She became Rossetti’s muse (and possibly his lover), particularly after the death of his wife and model, Elizabeth Siddal, in 1862. He allegedly associated his feelings for Jane Morris with Dante’s for Beatrice, adding a personal note of longing to this, his last large-scale painting.