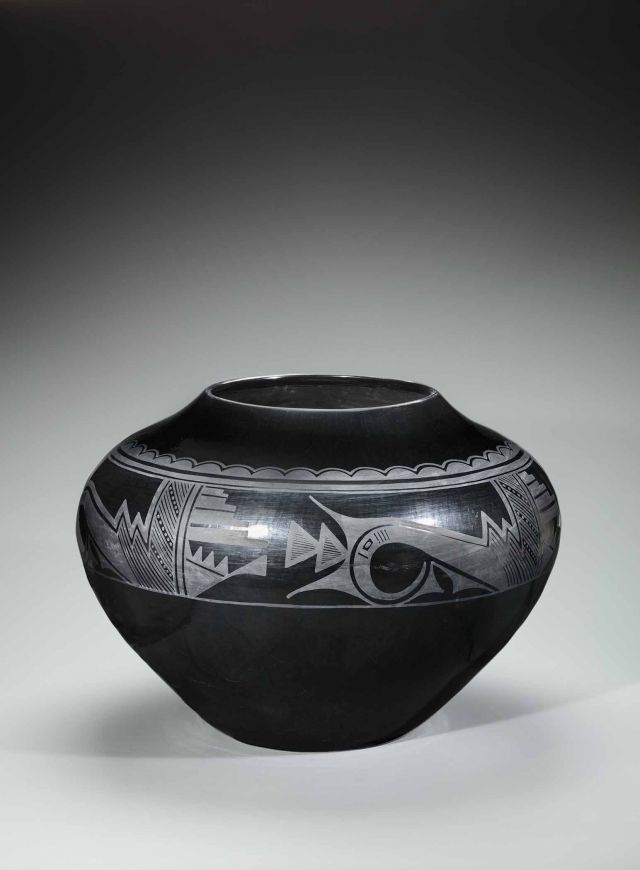 A matriarch of 20th-century Native American pottery, Maria Martinez is largely credited with having revived the ancient tradition of black on black pottery that remains popular to this day. At the time that it was revived, the style of blackware pottery that Martinez popularized stood in notable contrast to the all-red or polychrome ware that had dominated the San Ildefonso Pueblo’s production for generations.

This extraordinary example of Martinez’s work is notable for its nearly perfect symmetry and iconic painting, featuring a pattern that symbolizes a bird, rain, and thunderclouds. Maria said of her work, “I just thank God because [my work is] not only for me; it’s for all the people. I said to my God, the Great Spirit, Mother Earth gave me this luck. So I’m not going to keep it.”

In keeping with Puebloan tradition of women as potters and men as painters, Maria’s husband Julian painted the design on the jar. The jar is signed “Marie and Julian” on the bottom, indicating that it was created after the mid-1920s when Martinez began to sign her pots for market purposes. This practice was not part of the pottery-making traditions of the Pueblo.