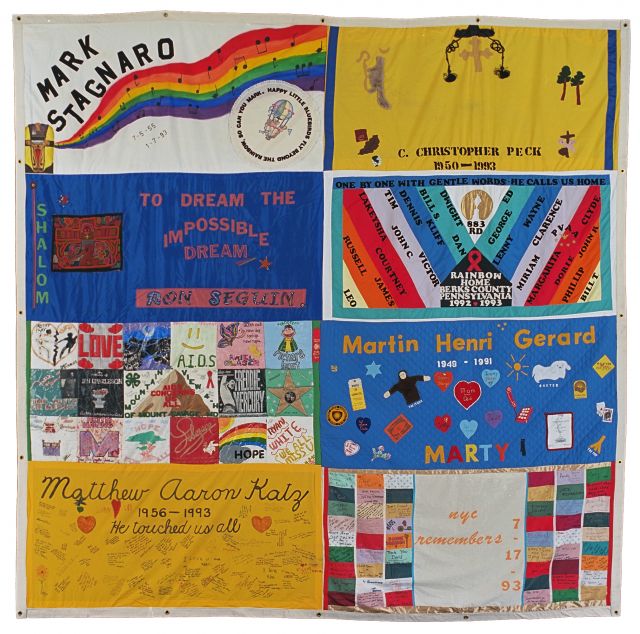 American quilts have long been connected with notions of tradition, with patterns and techniques passed down for generations in communities throughout the country. As nostalgic symbols of the American past, quilts have been viewed as antidotes to upheaval during times of change. Disrupting our expectations of quilts as objects that provide warmth and comfort, Radical Tradition: American Quilts and Social Change will explore the complicated and often overlooked stories quilts tell about the American experience, offering new perspectives on themes including wartime support and protest, civil rights, gender equality, queer aesthetics, and relationships with land and the environment. Radical Tradition will be open at the Toledo Museum of Art Nov. 21, 2020-Feb. 14, 2021.

Featuring more than 30 quilts and textile-based works that reflect historical and cultural diversity, along with a virtual quilting bee project for participants around the country, the exhibition will consider how quilts have been used to voice opinions, raise awareness and enact social reform from the mid-19th century to the present.

“In the context of the coronavirus pandemic and our country’s current reckoning with racial injustice, Radical Tradition takes on a particular urgency and relevance,” said Lauren Applebaum, Ph.D., associate curator of American art at TMA and curator of the exhibition. “Quilts have always engaged the pressing social and political issues of their time. They have been deployed throughout history by marginalized people to confront instances of violence, oppression and exclusion. Today, they are a vital resource and medium for exploring some of the crises of our history as told through the eyes of women, LGBTQ individuals, people of color and the communities that formed around important social issues of the last two centuries.”

While addressing these powerful themes, Radical Tradition will highlight how, over nearly two centuries, the strategies and materials of quiltmaking have called into question long-established power structures. Earlier quilts in the exhibition represent one of the few available outlets that women from a wide range of cultural and socioeconomic backgrounds had to express their views and connect with larger social and political networks of their time. Building upon this history, some quiltmakers from more recent decades have chosen to work within this craft-based medium – typically associated with “the domestic” – in order to subvert hierarchies both within the art world and in society at large. Incorporating a wide range of media – from cotton and wool to salvaged wood, paint and celluloid film – the objects on view will challenge traditional definitions of what a quilt is and the form it can take.

A highlight of the exhibition is acclaimed contemporary artist Bisa Butler’s 2020 work “The Storm, the Whirlwind, and the Earthquake,” a tour-de-force composition made entirely of quilted and appliqued cotton, silk, wool and velvet, depicting 19th-century abolitionist and social reformer Frederick Douglass at full-length human scale against a vibrant patterned background. The artwork’s title references his famous speech, “What to the Slave is the Fourth of July,” delivered on July 5, 1852, in which Douglass admonished the celebration of freedom during a time of slavery. The work was recently acquired by TMA for its permanent collection.

Though her training focused on painting, Butler discovered that quiltmaking and fiber art allowed her to more fully articulate, reclaim and honor the countless contributions and untold histories of African Americans. “I am inviting a reimagining and a contemporary dialogue about age-old issues, still problematic in our culture, through the comforting, embracing medium of the quilt,” Butler said recently. “I am expressing what I believe is the equal value of all humans.”

In addition to Butler’s work, Radical Tradition will showcase works by artists such as Sanford Biggers, Kathryn Clark, Jeffrey Gibson, Sabrina Gschwandtner, Diana Baird N’Diaye, Faith Ringgold, LJ Roberts, Aminah Robinson, Hank Willis Thomas and Anna Von Mertens. It will also feature community quilt projects, including panels from “The International Honor Quilt (IHQ),” initiated by Judy Chicago, progenitor of the feminist art movement. Originally called the “International Quilting Bee,” the project’s public call invited participants from around the world to contribute a triangular quilt block honoring a woman of personal significance. This collaborative format would be adopted several years later by the “AIDS Memorial Quilt” project, a panel of which will also be on display in the exhibition.

Another highlight will be a work by one of the quiltmakers from the Freedom Quilting Bee (FQB), a quilting cooperative based in the rural, Black community of Alberta, Alabama, north of the nearby Gee’s Bend. Established by a group of local women in 1966, in the wake of the march from Selma to Montgomery, the FQB provided jobs to residents who faced harassment and discrimination for registering to vote. Gaining wide acclaim and popularity in the New York art and design world for its extraordinary production of bold and improvisational quilts, the FQB has been credited for inspiring a nationwide quilting revival in the 1970s.

Additional historical works will include a Red Cross quilt, dated 1917, that represents the fundraising and volunteer efforts put forward by civilians during World War I. More than 500 names are embroidered in the center of the quilt, each representing a donation to the Red Cross. Proceeds went toward the purchase of ambulances, nursing equipment and bedsheets for soldiers and civilian refugees abroad.

Visitors will also be able to see an abolition quilt, created about 1850, and the “Vietnam Era Signature Quilt,” made in the 1960s-1970s to raise money to rebuild a hospital in Vietnam that had been bombed by the U.S. Air Force. It includes the signatures of prominent public figures including Joan Baez, Leonard Bernstein, César Chávez, Shirley Chisholm, Jeanette Rankin and Gloria Steinem.

A 100-page fully illustrated publication accompanies the exhibition, with an introduction by the curator.

The exhibition is supported in part by 2020 Exhibition Program Sponsors Taylor Cadillac and ProMedica, Checker Distributors and the Ohio Arts Council. Admission to Radical Tradition is free for Museum members and $12 for nonmembers. Ticket discounts for military, college students and seniors ($10); youth ages 5-17 ($7); and children ages four and younger (free) are available.

Inspired by Radical Tradition, TMA organized a COVID-19 Virtual Quilting Bee in advance of the exhibition opening. Nearly 100 quilt squares were submitted from across the United States; they will be virtually stitched together for online viewing prior to the opening of Radical Tradition. Community members submitted both traditional patterned quilt blocks and those addressing aspects of life amid the current global pandemic, which marks a moment of change and uncertainty on a global scale. The TMA COVID-19 Virtual Quilting Bee is sponsored by The Electric Quilt Company.