"Telling Stories: Resilience and Struggle in Contemporary Narrative Drawing" at Toledo Museum of Art this fall 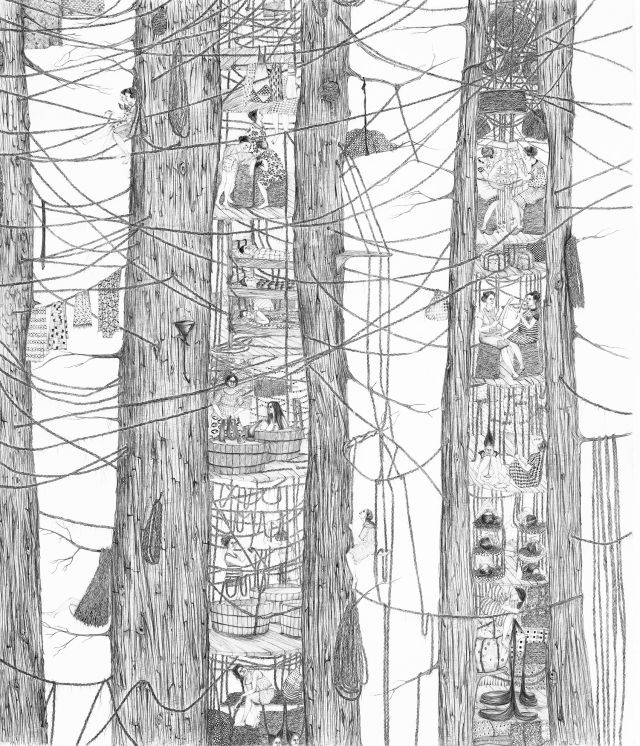 Three internationally renowned artists, who represent the extraordinary vitality of contemporary drawing, will be featured in a special exhibition beginning in November at the Toledo Museum of Art (TMA). Telling Stories: Resilience and Struggle in Contemporary Narrative Drawing will be on view at TMA from Nov. 21, 2020, through Feb. 14, 2021. Twenty-five large and small-scale works and an animated film, drawn from TMA’s holdings and public and private collections across North America, will be featured in the exhibition.

Telling Stories displays the work of the third-generation Inuit artist Annie Pootoogook of Cape Dorset, Canada, and two American artists, Amy Cutler and Robyn O’Neil. These artists showcase the power of drawing as a distinctive form of expression, creating open-ended narratives within natural landscape settings that chronicle the complexities of modern human relationships. Their remarkable compositions ­– that rely upon inventive mark-making systems and singular approaches to rendering space – incorporate the surface of the paper to call attention to the medium's distinct properties.

“Drawing has seen a remarkable resurgence as a preferred means of art-making over the last 35 years by young artists who have discovered exciting new possibilities for the medium," said Robin Reisenfeld, TMA’s senior curator of works on paper. "The exhibition offers a lens into this accessible and ever-evolving form of expression by bringing together three artists whose central practice utilizes graphite and paper. Telling Stories also supports the Museum’s mission to provide a diversity of exhibitions for a broad array of audiences.”

Told primarily through pencil and paper, the theme of human resilience in the face of pressing societal and ecological concerns is a central focus for each artist. Their tales offer the viewer varying modes of human engagement with one another and the natural world – whether in collective harmony, or through self-destructive impulses and shifting alliances – and the struggles that ensue. At the same time, the works draw on a range of cultural and stylistic sources, characteristic of the global nature of contemporary artmaking.

Robyn O’Neil is well known for her monumental graphite compositions depicting tiny, anonymous male figures who inhabit vast and forbidding natural settings. In style and mood, her distinctly contemporary works build upon the longstanding tradition of landscape art to consider human struggles in nature, extreme weather and nature’s ephemeral beauty. Scenarios that often recall the collective sense of anxiety and isolation are inspired by a wide range of artistic sources, ranging from the Northern Renaissance artist Hieronymous Bosch (1450 -1516) to the Hudson River School painters and their evocation of nature’s grandeur and destructive forces.

Annie Pootoogook’s colorful, directly observed compositions chronicle the everyday domestic and social activities of her Cape Dorset community and challenge picturesque portrayals of Inuit life often found in traditional Inuit graphic art. Her scenes of interior home life and outdoor recreational and hunting activities, sprinkled with references to western rituals of media consumption, mass-produced consumer items and modern technology, document contemporary Inuit experience as a fluid continuum between past and future. Pootoogook's perceptive and inventive drawing style utilizes flattened and cinema-like perspectives, the isolation of objects and the distortion of scale to capture the rapidly changing, local Inuit culture and its absorption into our global society.