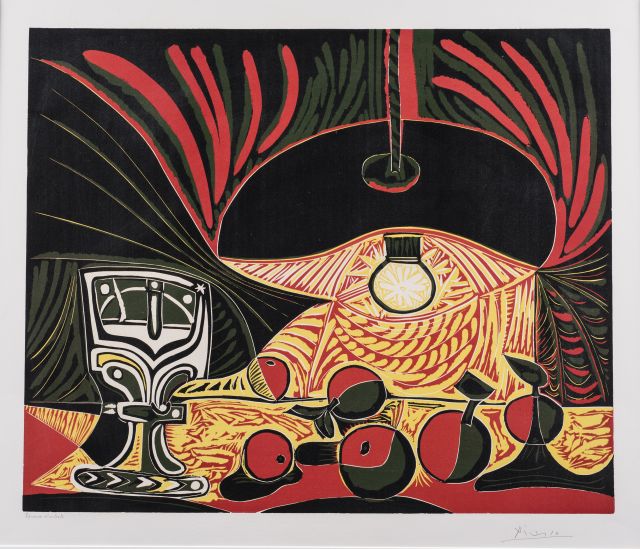 The Toledo Museum of Art (TMA) has acquired Still Life with Glass Under the Lamp (1962) by iconic 20th-century artist Pablo Picasso. The four-color linocut print was purchased for TMA by the Georgia Welles Apollo Society, a group of donors that generously supports the Museum through annual art acquisitions. A relief process akin to the woodcut, the linocut shows a brightly illuminated group of apples next to a glass goblet displayed under an electric lamp. Its decorative design comprised of flattened objects, and vivid yellow and red sweeping contour lines that cut through the dark background, explores light’s pervasive force through the artist’s use of bold color. The dramatic and playful work is the first still life by Picasso to enter TMA’s collection, as well as the first object in the collection from this late stage of his career. Immensely versatile and prolific, Picasso (1881-1973) pioneered the “reductive” linocut print technique that he used to create Still Life with Glass Under the Lamp. The new acquisition will be included in future TMA gallery rotations and special exhibitions.

“This strikingly colorful linocut from Picasso’s later career is not only an imaginative and vibrant update of the longstanding still life genre but also expands TMA’s graphic holdings,” said Robin Reisenfeld, TMA’s senior curator of works on paper. “It is astonishing, not only for its technical virtuosity, but also stylistically, and demonstrates the breadth of his innovative approach to printmaking.”

Renowned for his painting and sculpture, Picasso was also one of the greatest printmakers of the 20th century. He created more than 2,500 unique prints that encompassed all the various printmaking traditions. At age 77, Picasso developed the new reductive method for creating linocut prints under the tutelage of Hidalgo Arnéra, a printer whose shop was near his studio in southern France. Until this time, most multicolored prints were produced using a series of different blocks, one for each color. However, Picasso chose to use just one block to gradually build an image of increasing complexity. Although this method offered the advantage of saving time, it didn’t allow room for error, as one could not backtrack and correct any previous mistakes made during the cutting process. Picasso created more than 200 linocuts between 1952 and 1965, all of which display rich texture, contrast, precision and vitality.

Picasso explored the still life tradition in painting and sculpture – including his early radical experiments in Cubism – but rarely in printmaking. In his work through the Second World War, his compositions often featured a frugal meal consisting of water, a candle and a single piece of fruit placed on a relatively bare table to convey the hardship of daily life. When Picasso returned to its treatment in the 1960s, his choice of the linocut not only allowed him to utilize brilliant color, which he had previously avoided in his prints, but also enabled him to expand the scale of his image.

One of Picasso’s most highly regarded prints, Still Life with Glass Under the Lamp acknowledges the artist’s earlier compositions while stylistically and technically updating an age-old genre with a lightbulb whose propulsive energy illuminates this animated scene.

Each year, the group consults with one of the Museum’s curators to select one or more works to purchase for the Museum’s collections with their pooled membership dues. For additional information about joining the Georgia Welles Apollo Society, please contact Kathryn W. Miller, development officer for major gifts, at 419-255-8000 ext. 7510 or kmiller@toledomuseum.org.