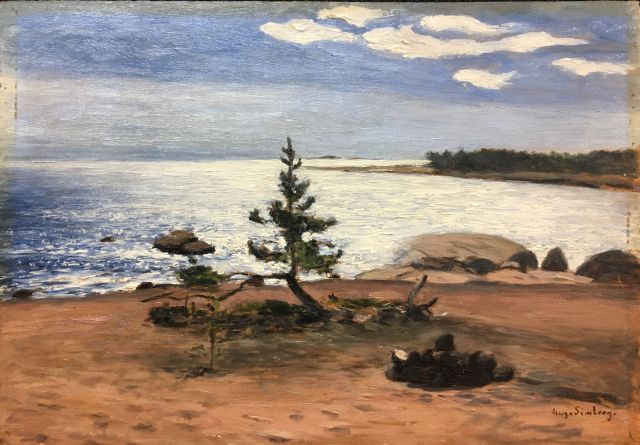 Two major works of art have been added to the Toledo Museum of Art’s permanent collection. Hugo Simberg’s A Sea View is the first painting by a Finnish artist to enter the collection, while Giovanni Battista Camuccini’s Ariccia, the Porta Napoletana with the Palazzo Chigi (Ariccia. La Porta Napoletana con Palazzo Chigi) is TMA’s first 19th-century Italian painting. Both works were acquired with funds donated by private individuals.

“Adding these two paintings to our permanent collection, in addition to the recent acquisition of a still life print by Picasso, is a wonderful example of how the support of our donors helps expand TMA’s offerings,” said Larry Nichols, William Hutton senior curator, European and American painting and sculpture before 1900.

Hugo Simberg (1873-1917) was part of the Finnish Golden Age of painting, approximately 1880 to 1910. Simberg painted Symbolist fantasies inspired by Finnish folklore, in addition to portraits and landscapes. Known for exploring the supernatural and the macabre, his most famous work, The Wounded Angel (1903) was selected as Finland’s national painting in a 2006 vote organized by Finland’s Ateneum Art Museum.

The oil on panel A Sea View was created around 1907-1917 and depicts a vista of Vyborg Bay, which is located at the northeast end of the Gulf of Finland in the Baltic Sea. For much of his life, Simberg spent his summers on the coast at Niemenlautta, his family’s summer residence near Viipuri (also known as Vyborg in Swedish). The artist even built a studio facing the sea. A Sea View was acquired by TMA with funds donated by Dr. John and Marja Dooner.

“There is an air of mystery about this work,” said Nichols. “Enigmatic footprints in the foreground, a burnt down fire on the beach, Symbolist features like the clouds with their extraordinary ‘tails,’ the glittering light on the water; these make the viewer wonder what’s transpired here before the scene was captured.”

Giovanni Battista Camuccini (1819-1904), the son of a renowned painter, Vincenzo Camuccini, was active as an artist only until the early 1850s. His body of work consists of studies from nature painted outdoors (en plein air), including trees, rocky outcroppings and topographical scenes.

Ariccia, the Porta Napoletana with the Palazzo Chigi (about 1840) depicts a vignette in the ancient village of Ariccia, located between Lake Albano and Lake Nemi, some nine miles southeast of Rome. The central motif of the Porta Napoletana, with its two-story archway framing a vista to a distant building and sky, is so named because it faces towards Naples. The looming structure at right is the Palazzo Chigi, the ducal palace of the Chigi family. The painting was purchased with funds given by Dr. and Mrs. James G. Ravin.

“This superbly preserved canvas gives us a rich composition of trees, grassy slope, road, three centrally positioned figures, architecture and sky,” said Nichols. “It showcases Camuccini’s spontaneity, combining the freedom and quickness of touch of an oil sketch with a degree of finish that renders it a complete work.”