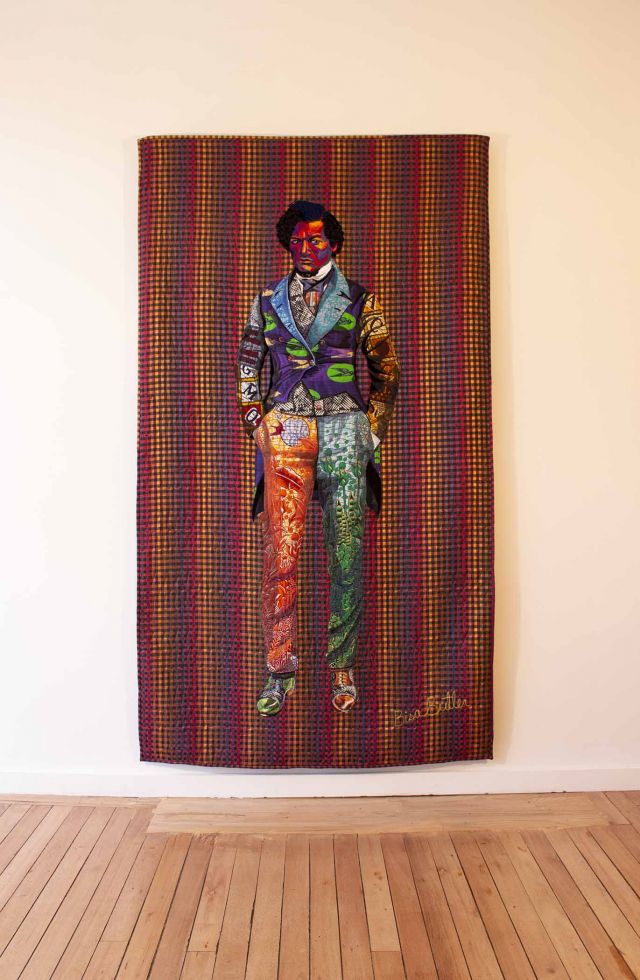 The Toledo Museum of Art has added a monumental quilted portrait of the 19th-century abolitionist and social reformer Frederick Douglass by acclaimed contemporary artist Bisa Butler to its collection. The new work, The Storm, the Whirlwind, and the Earthquake (2020) is a tour-de-force composition made entirely of quilted and appliqued cotton, silk, wool and velvet, depicting Douglass at full-length human scale against a vibrant patterned background.

Born in 1973 in Orange, New Jersey, and currently living and working in West Orange, Butler studied fine art at Howard University and subsequently earned a master’s degree in art education from Montclair State University. Prior to turning to artmaking full time, Butler taught art in the South Orange and Maplewood, New Jersey public schools. Though her training focused on painting, Butler discovered that quiltmaking and fiber art allowed her to more fully articulate, reclaim and honor the countless contributions and untold histories of African Americans. Butler learned to sew from her mother and grandmother long before she began to paint. Employing wax-printed fabrics from Ghana, her father’s homeland, as well as kente cloth and Dutch wax prints, Butler engages in a meaningful and dynamic conversation with traditional African textiles. The artist also builds upon the legacy of African American quiltmaking, feminist craft strategies of the 1970s and 80s and the collage techniques of Romare Bearden.

“In my work, I am telling the story – this African American side – of the American life. History is the story of men and women, but the narrative is controlled by those who hold the pen. My community has been marginalized for hundreds of years. While we have been right beside our white counterparts experiencing and creating history, our contributions and perspectives have been ignored, unrecorded, and lost,” states Butler.

Brimming with vitality, dignity and power, the life-sized figures in Butler’s painterly textiles connect with viewers eye-to-eye, conveying a sense of shared humanity and mutual respect. The artist’s creative process consists of mining archival photographs of African Americans, recreating the forgotten faces and unsung personalities through methodical planning and layering of vibrant colors and textures of fabric and ultimately sewing the final quilt into place. “I represent all of my figures with dignity and regal opulence because that is my actual perspective of humanity,” says Butler.

After escaping slavery, Douglass (1817-1895) became an influential orator, writer and leader of the abolitionist movement. The work’s title references a famous line from a July 5, 1852 speech, in which Douglass, alluding to a July 4 pyrotechnic display, admonished the celebration of freedom during a time of slavery: “It is not the light that we need, but fire; it is not the gentle shower, but thunder. We need the storm, the whirlwind, and the earthquake.” Douglass was the most photographed person of the 19th century, and his likeness in this quilt is a composite of several photographic sources, which captures the subject’s conviction and perseverance.

The artwork will be on view beginning this summer. The Storm, the Whirlwind and the Earthquake will be installed alongside works from TMA’s permanent collection that have been selected by Butler in collaboration with the curatorial team.

The Storm, the Whirlwind, and the Earthquake will also be included in the upcoming group exhibition Radical Tradition: American Quilts and Social Change, which will be on view exclusively at TMA from Nov. 21, 2020, through Feb. 14, 2021. Curated by Lauren Applebaum, Ph.D, the Brian P. Kennedy Leadership Fellow at TMA, the exhibition will bring historical and contemporary works together in critical dialogue to explore how quilts have been used to voice opinions, raise awareness, and enact social reform in the U.S. over the past two centuries. The exhibition is supported in part by 2020 Exhibition Program Sponsor ProMedica, Checker Distributors and the Ohio Arts Council.

“Upon seeing images of this inspiring textile before its completion, and later viewing it in person during a visit with Bisa in her studio this past January, I knew this work and the artist’s overarching message would resonate deeply with all of the communities we serve,” said Applebaum. “Douglass is a monumental figure in American history and the struggles over racial equality that he fought for still persist in our society and our institutions today. Through her work, Butler pointedly and importantly asks audiences to reconsider their assumptions, values and actions going forward.”

As Butler has said, “I am inviting a reimagining and a contemporary dialogue about age-old issues, still problematic in our culture, through the comforting, embracing medium of the quilt. I am expressing what I believe is the equal value of all humans.”