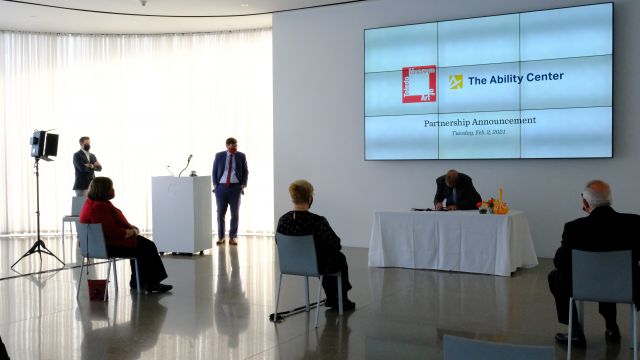 Toledo Museum of Art and The Ability Center of Greater Toledo

The Toledo Museum of Art (TMA) and The Ability Center of Greater Toledo (ACT) signed a memorandum of understanding today establishing a new, multi-year strategic partnership with co-investment by both organizations. The collaboration will support ACT and TMA in their efforts to create a community and a Museum that aspire to be the most disability- friendly in the country.

The establishment of the Manager of Access Initiatives position – a new role and the first of its kind at a major art museum – demonstrates the potential of this unique partnership, as the position will mutually benefit TMA, ACT and all of Northwest Ohio. This shared role will bring ACT’s knowledge and resources to the Museum for a period of several years, equipping TMA with the expertise to identify and systematically eliminate barriers to encounters with art, improving the Museum experience for people with disabilities at any stage of life.

“Seeking the expertise of The Ability Center as a guide, the Toledo Museum of Art is prioritizing its vision to become the model among art museums for its culture of belonging,” said Adam Levine, Toledo Museum of Art Edward Drummond and Florence Scott Libbey director. “The Museum is holding itself accountable to a formal Diversity, Equity, Accessibility and Inclusion (DEAI) plan, which is being developed with input from staff, volunteers, Board and the community. The strategic partnership with The Ability Center, unique in our field,strengthens TMA’s efforts to become a more inclusive Museum and community partner. We aim to become the most disability-friendly art museum in the United States.”

“One in four people in the U.S. have a disability that impacts the way they connect with the world around them, including their experience of fine art and museums,” said Tim Harrington, The Ability Center executive director. “Everyone has a role in creating a community that is disability friendly; at The Ability Center, we work to challenge both attitudes and real- world conditions for people with disabilities. The Ability Center through its supporting organization is investing in this project as part of its strategic initiatives. We look forward to working with the Toledo Museum of Art to ensure the Museum fully welcomes the potential and participation of each of its visitors, including those who live differently.”

Serving at the core of the partnership, the Manager of Access Initiatives will audit Museum policies, procedures, practices and physical plant, making recommendations to incorporate aspects of inclusive design and enhance accessibility. Following rigorous measurement, assessment and evaluation – and a determination of demonstrated progress in making TMA more accessible to people with disabilities – the Manager of Access Initiatives will eventually transition to begin work with another local organization in a similar strategic partnership.

The job description for the new position will be posted today at toledomuseum.org/jobs, and applications will be accepted immediately.

Dedicated funding has been identified to implement the recommendations made through the audit process. “The Museum, with generous support from Judith, Joseph and Susan Conda, has funded both the position’s competitive salary and the costs associated with implementing the Manager of Access Initiatives’ recommendations,” Levine said.

The partnership will simultaneously serve as an ongoing proving ground for The Ability Center’s initiatives while fueling regional conversations about accessible spaces, inclusive programs and employment opportunities.

Both TMA and ACT have been supported by – and active members of – the Toledo community and the greater region for more than a century. Since its founding in 1901, the Toledo Museum of Art has earned a global reputation for the quality of its collection, its innovative and extensive education programs and its architecturally significant campus. Thanks to the benevolence of the Museum’s founders, Edward Drummond Libbey and Florence Scott Libbey, and the continued support of its members, TMA remains a privately endowed, non-profit institution and opens its collection to the public, free of charge.

The Ability Center has been making independence possible since 1920, when The Rotary Club of Toledo founded a society to raise funds to build a hospital for children with polio. The first hospital and convalescent home for children with disabilities opened in 1931 and was made possible through a gift from the Edward Drummond Libbey estate. After undergoing several evolutions as an agency, in its centennial year of 2020, The Ability Center unveiled innovative initiatives that highlight its rich history of service and its role in creating the most disability- friendly community in the country.