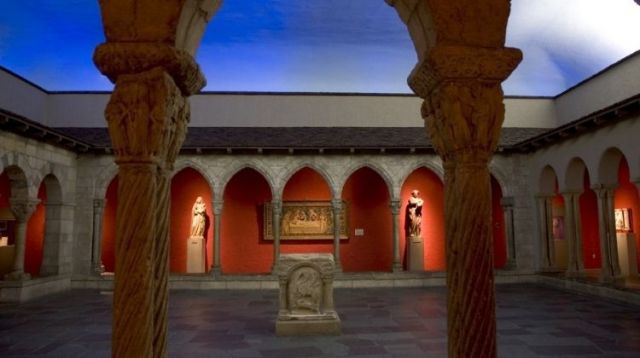 After a year-long conservation and renovation project, the Toledo Museum of Art’s (TMA) Cloister Gallery will present a wider range of the cultural heritage of the Middle Ages when it reopens on Dec. 18, 2021. In addition to a complete reinstallation of works on view, the project entailed the comprehensive cleaning of the gallery’s three medieval arcades and Venetian wellhead, removing centuries of accumulated dirt; the conservation of three stained-glass windows and other works of art that have not been on view in the gallery for decades; and new casework, lighting and security. The Toledo Museum of Art’s Cloister Gallery is home to one of the finest collections of medieval art in North America.

“The Cloister Gallery is one of the most popular and evocative spaces at TMA and is known nationwide for bringing the Middle Ages to life through its collections and display,” said Adam M. Levine, TMA’s Edward Drummond and Florence Scott Libbey director and CEO. “The reinstallation of this beloved gallery is part of the Museum’s strategic efforts to tell a more accurate and inclusive world history. In so doing, we hope to instill a sense of belonging for all of our visitors.”

TMA’s Cloister Gallery represents a unique assemblage of three medieval arcades composed of capitals and columns from different monasteries in southern France. In 1926 TMA’s third director, Blake-More Godwin, envisioned a cloister-like gallery that combined Romanesque and Gothic architecture to display the institution’s nascent medieval collection. The Museum secured its first set of historiated capitals (carved with imagery) from Saint Pons-de-Thomières in 1929, followed by a colonnade possibly from the Cistercian abbey of Nôtre-Dame-de-Pontaut a year later. The gallery was dedicated in 1933, and in 1934 the Museum acquired and installed a third arcade, attributed to the 12th-century Cuxa workshop active in the environs of Perpignan, France.

The reinstallation of the Cloister Gallery underscores TMA’s foundational educational mission by expanding the scope of the art on view to better reflect a more interconnected and global Middle Ages (about 500-1500 C.E.).

“By leveraging the Museum’s collection, including new acquisitions, TMA broadens the typical museum narrative of medieval art chronologically, culturally, geographically and materially,” said Sophie Ong, TMA’s Hirsch curatorial fellow, who is leading the reinstallation and renovation project. “While continuing to highlight TMA’s esteemed collection of medieval art from western Europe, the reinstalled Cloister Gallery will draw connections across time and media to showcase the artistic prowess and cultural wealth of the Middle Ages globally.”

The reinstalled Cloister Gallery will explore themes such as religious plurality and devotion, the legacies of Rome, the role of women in the arts, and cultural interaction and exchange. Among the approximately 100 remarkable artworks featured in the space will be a diverse array of sacred and everyday objects from across the medieval world, including a gilded bronze standing Buddha from around 530; Late Antique blown glass vessels with Jewish symbols from Jerusalem; a mosque lamp from Mamluk Egypt; a 13th-century German reliquary embedded with a carved Carolingian rock crystal; frescoes of saints from 12th- and 13th-century Catalonia; ivory caskets with scenes from medieval romances; and a 14th-century Sultanate Mihrab from India.

A publication celebrating the reinstalled and restored Cloister Gallery will be available in spring 2022. The Cloister Gallery reinstallation is made possible by Dr. and Mrs. John J. Dooner, Jr., with additional support from Taylor Cadillac, Bob Griess and Min Zhing, and Mr. and Mrs. Michael J. Horvitz.