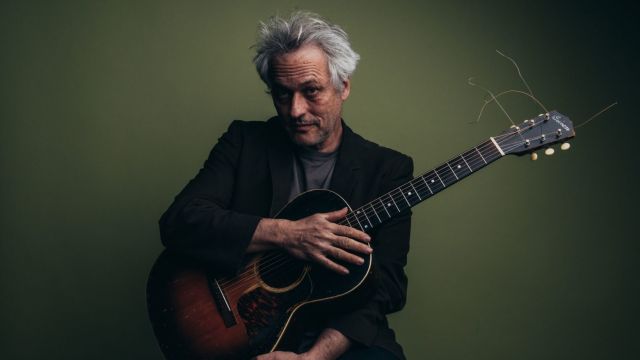 The Toledo Museum of Art's popular Sounds of Silents series features silent films with live musical accompaniment in the Museum’s Peristyle Theater. On Feb. 6, 2020, at 7 p.m. legendary guitarist Marc Ribot will provide the score for the 1924 sci-fi classic “Aelita: Queen of Mars.” Pianist and composer Anthony Coleman will join Ribot on piano and TMA’s Skinner organ, which was installed in its current location in the Peristyle in 1933 by the Skinner Organ Company.

“To have a legend like Marc Ribot performing in the Museum’s Sounds of Silents series is a thrill, and pairing him with Anthony Coleman on the keyboard will be a one-of-a-kind experience,” said Scott Boberg, TMA manager of programs and audience engagement. “Plus, early movie fans will love Aelita, which helped define the genre of science fiction filmmaking in the 1920s.”

Marc Ribot has released 25 albums under his own name over a 40-year career, exploring everything from the pioneering jazz of Albert Ayler with his group “Spiritual Unity”, to his latest album, “Songs of Resistance,” which was included on NPR’s All Songs Considered’s Best of 2018. Rolling Stone calls him “the go-to guitar guy for all for all kinds of roots-music adventurers: Robert Plant and Alison Krauss, Elvis Costello, John Mellencamp.” Additional recording credits include Allen Toussaint, Norah Jones, Akiko Yano, The Black Keys, Jeff Bridges, Elton John and many others. Ribot frequently collaborates with producer T Bone Burnett, most notably on Alison Krauss and Robert Plant's Grammy Award-winning "Raising Sand" and regularly works with composer John Zorn.

Ribot has performed on film scores such as “The Kids Are All Right,” “Where the Wild Things Are,” "Walk The Line," "Everything is Illuminated," and "The Departed." He has also composed original scores including the French film Gare du Nord (Simon), the PBS documentary "Revolucion: Cinco Miradas," and dance pieces "In as Much as Life is Borrowed", by famed Belgian choreographer, Wim Vandekeybus. He also occasionally performs live scores to silent films including Charlie Chaplin’s “The Kid” and Josef Van Sternberg’s “Docks of New York.”

Directed by Yakov Protazanov, “Aelita: Queen of Mars” is based on a Tolstoy novel of the same name. “Aelita” tells the story of an engineer, Los, who creates a spacecraft capable of flying to Mars. Los sets out for the Red Planet with Gusev, a Red Army soldier, and a sleuth called Kravtsov. On Mars, the trio encounters an alien humanoid civilization. While Gusev plots a revolution, a love affair blossoms between Los and Aelita, the daughter of the Martian leader.

“Aelita” found little favor with the Soviet censors upon its release, as it lacked sufficient enthusiasm for the Marxist revolution. Audiences enjoyed it, however, and it has remained a favorite among sci-fi film aficionados. One of the first full-length films about space travel, Aelita’s influences can be seen in the further development of the sci-fi genre in the 20th century.

Tickets for the film screening are $5 for Museum members, $7 for nonmembers, and $4 for students and military.