A Tribute to Roger Mandle

Roger Mandle at the Toledo Museum of Art, 1977.

The Toledo Museum of Art is greatly saddened by the recent death of its fifth director, Roger Mandle.

Roger came to TMA from the Minneapolis Institute in 1974 to take on the role of associate director under Otto Wittmann; he ultimately succeeded Otto in 1977 and served as director until the fall of 1988. In a recent oral history interview with the Museum’s Art Reference Library staff, Roger shared that “Otto Wittmann used to say that his goal was not to become a great tourist attraction. His goal was to serve the local community, and if the collections and programs are good enough, other people would come, and that’s exactly my philosophy.”

Roger’s tenure was marked by outstanding acquisitions in virtually every field in which the Museum collects as well as dramatic and enduring building modifications, including the creation of the Plough Pavilion, the Herrick entrance and lobby, the main stairway to Libbey Court, Canaday Gallery for special exhibitions, and the renovation of 16 collection galleries. These galleries played host to landmark exhibitions, perhaps none so well-remembered as El Greco of Toledo. Looking to the future, he inaugurated a capital campaign with the University of Toledo for building improvements, which led to the eventual creation of the Frank O. Gehry-designed Center for Visual Arts on the Museum campus. 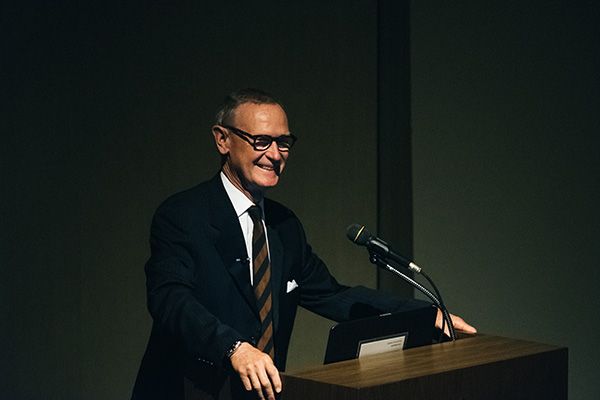 His career would take him to illustrious organizations such as the National Gallery, Washington, D.C. where he served as deputy director and curator from 1988 to 1993; the Rhode Island School of Design where he led the institution as president from 1993-2008; and the Qatar Museums Authority, for which he was executive director from 2008-2012. He sat on many national and international advisory boards, and over the past few years reconnected with the Toledo Museum of Art, where he served on the Museum’s Art Committee. Roger’s legacy is indelibly marked on this institution, but he will be remembered by those who knew him for his wit, his charm, and his giving personality. The breadth of his interests and the depth of his thinking was distinguished, and he left the institutions he served, and the world, a better place.

“Roger Mandle’s impact on the Toledo Museum of Art continues to be felt to this day,” said TMA Director Adam Levine. “From the renovations and structural changes that occurred during his tenure to our continued work in the community—being a resource when they need access to art the most—our visitors continue to benefit from his leadership.”

In that same oral history interview, Roger said “Given Edward Drummond Libbey’s admonition or recommendation over the door—engraved over the door of the Museum, ‘For those who seek self-improvement,’ that became my sort of guide for what I attempted to do.”

He will be greatly missed by all who knew him, as well as by all those who benefited by his leadership of the Museum during those important years of growth and expansion.