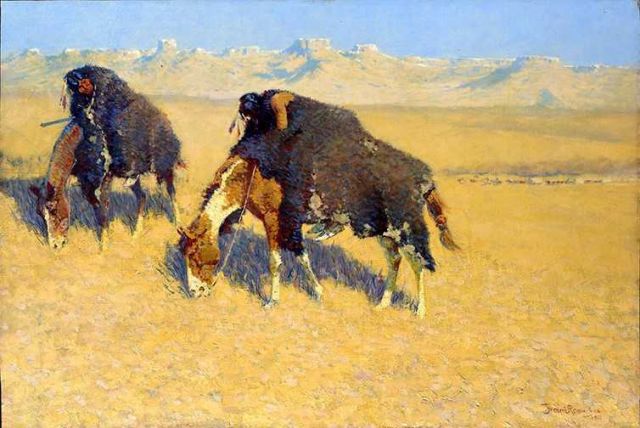 An exchange of glances is the focal point of Frederic Remington's intriguing homage to a vanishing lifestyle. Bent over their grazing ponies with buffalo skins thrown over them, two Native Americans of the Western plains employ a time-honored hunting trick. In this context, however, they have disguised themselves as bison in order to scout the presence of white settlers: a barely visible wagon train seems to have prompted their significant look.

This painting, strongly influenced by Impressionism, was commissioned for the cover of the September 18, 1909 issue of the popular magazine Collier's Weekly. Though Remington frequently cast Native Americans as aggressors in his art, this image is more ambiguous.

This painting is currently on view in Gallery 30B.

Art Minute is sponsored in part by Taylor Cadillac and American Frame.