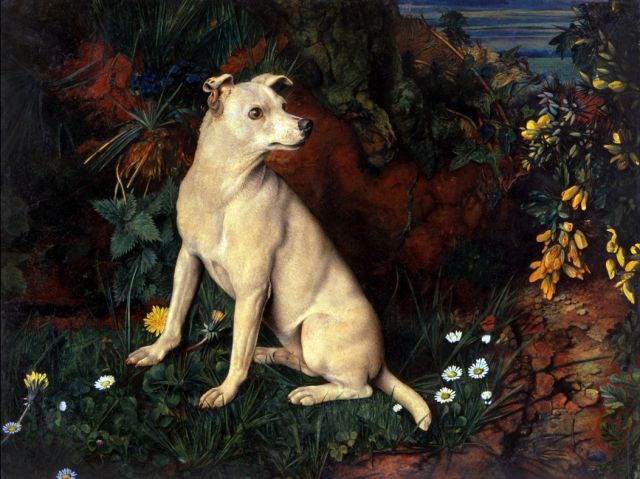 A little known painter, an extinct dog breed: one very alluring painting. The subject matter of William Webbe’s few surviving works includes animals, genre scenes, and topographical landscapes. Indebted to his fellow English painter William Holman Hunt, whose portrait of his wife is on view in the same gallery, Webbe painted his White Terrier in a similarly meticulous manner. Seemingly every hair on the animal, every blade of grass, and every blossom is captured with microscopic focus and a hyper-clarity bordering on the fantastic.

The distinct charm of Webbe’s image derives from the intensity of his portrait “sitter.” This clearly is not just any dog. Webbe certainly was painting from life (or possibly from a photograph) the portrait of a specific animal, perhaps a posthumous likeness of a beloved lost friend. Sadly, neither the name of the dog, nor that of its owner, is known. The White English Terrier was established as an official breed in the early 1860s and became popular as a show dog. Renowned for its alertness, the breed quickly became extinct after 1895 when cropping of the ears was outlawed and interest in the breed waned.