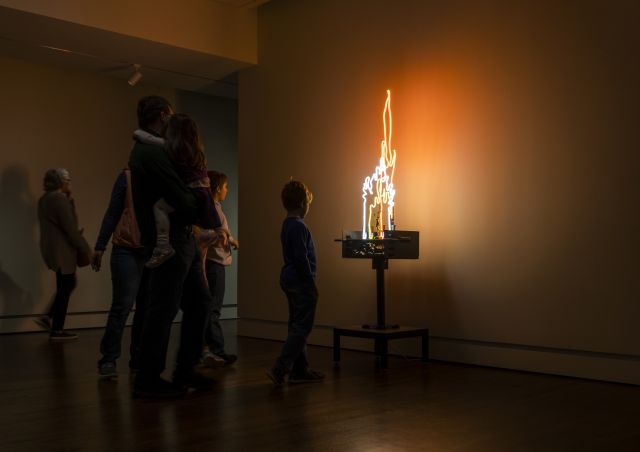 Deborah Czeresko uses humor and food in her work to make statements about gender inequality. A masterful glassblower and sculptor who has worked with the material for more than 30 years, this is Czeresko’s first foray into the world of neon.

Combining neon and found objects, Oh God/Martina 59/9 was initially created for the exhibition, Collaborations with Queer Voices, a group exhibition organized by the Brooklyn-based neon collaborative Fag Signs (FS), that aims, in part, to reclaim a historically derogatory word for the Queer community. The FS team (Matthew Day Perez and Kate Hush) called on artists from across the LGBTQIA+ community to use words, symbols, and the flashiness of color created with noble gasses, glass and electricity to share messages and meaning from this marginalized community.

Czeresko’s Oh God/Martina 59/9 addresses the gendering of occupations in athletics. The composition, which includes a trophy of a young female tennis player being swallowed up by neon flames atop a traditional American barbeque was inspired by the US national women soccer team’s class-action lawsuit that challenged the significant discrepancy in pay between men’s and women’s teams. The title of the work specifically references the successful lesbian tennis player Martina Navratilova and the number of titles that she won during her extraordinary career – 59 Grand Slam and 9 Wimbledon tournaments. Navratilova is considered one of the best female tennis players of all time.

In her own words, Czeresko states: My work addresses the gendering of occupation and object. The piece—Oh God—confronts ideas about female physicality and value within the labor of athletics. The piece draws from a collection of vintage trophy tops depicting women triumphant in sports. The idea to make the grill still life grew when I unknowingly visited the pyre of Joan of Arc in Rouen, France. Then solidified when the news that the US national women's soccer team filed a lawsuit against the US Soccer Federation over the unacceptable gender wage gap they experience. Using neon flames and blown glass charcoal atop the altar of male cooking—the outdoor grill—the victorious figurine is immolated by the grill which stands in for societally dominant ideas about gender and the body.