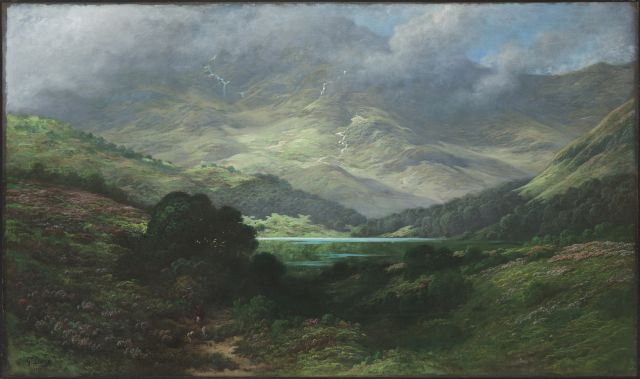 The rugged, cloud-wreathed mountains in this painting of the Scottish Highlands dwarf the hunter and his dogs in the foreground. This contrast of scale between human and Nature communicated the sense of awe many 19th-century travelers felt in this land romanticized as one of the last “unspoiled” corners of the British Isles. French artist Gustave Doré made his fame (and a vast fortune) as a prolific illustrator of editions of the Bible, Dante, Milton, Shakespeare, and others. However, illustrating was not his greatest passion. “I illustrate today to pay for my paint and my brushes, but my heart has always been with painting,” he proclaimed.

Doré first traveled to Scotland in 1873. He sketched incessantly on that initial trip and returned again the following year. The series of paintings of the Highlands that he produced from 1874 to 1881 were based on these sketches. They represented his “reminiscences of the Highlands” rather than topographical descriptions of actual landscapes. As a result, The Scottish Highlands captures a romantic ideal of a timeless, wild land untamed by human civilization.

This work is currently on view in Gallery 33.