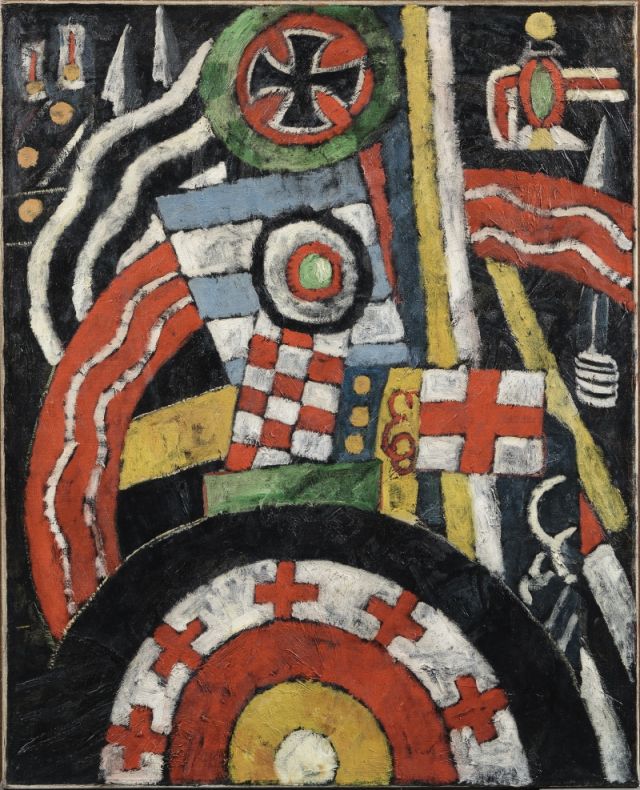 Living in Berlin in 1914 and 1915, American artist Marsden Hartley experienced the militaristic pageantry and spectacle of the outbreak of World War I, aspects for which he confessed to having a childish wonderment. However, he was also confronted with the sober reality of war when his lover, a Prussian lieutenant named Karl Von Freyburg, died in battle in 1914, and a dear friend, Von Freyburg’s cousin, was seriously wounded.

Abstraction (Military Symbols) is part of a 14-painting series that Hartley produced in 1914–15 dedicated to these men. He expressed his emotions in the paintings by using a personal vocabulary of symbols. Hartley simplifies and distorts the banners, flags, and emblems to create powerful, decorative patterns and dynamic, pulsating rhythms that convey his intense, complicated response to such military displays.

After returning to the U.S. in December 1915, Hartley denied that the symbols in his military abstractions had any specific meaning, claiming instead, “I have expressed only what I have seen.” Hartley’s denials, however, are believed to have been prompted by his attempts to conceal his sexuality and concern that his paintings might inflame the intense anti-German feelings already rampant in America at the time.