June 3 Art Minute: Hubert Robert, The Studio of an Antiquities Restorer in Rome 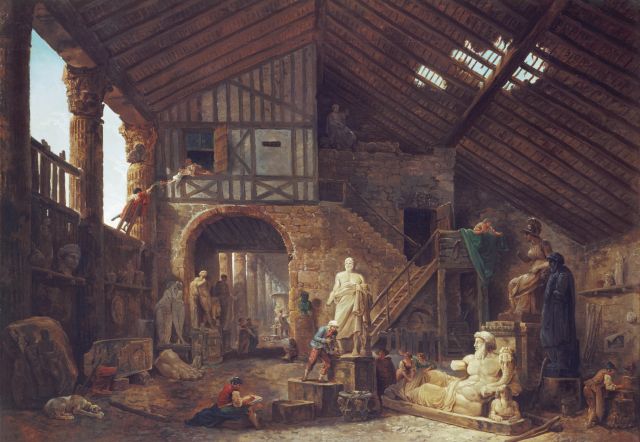 Hubert Robert (French, 1733-1808) The Studio of an Antiquities Restorer in Rome. Oil on canvas, about 1783. Purchased with funds from the Libbey Endowment, Gift of Edward Drummond Libbey, 1978.5. Gallery 27

Hubert Robert’s paintings of Italian ruins and fanciful views of crumbling, imaginary Paris buildings earned him the nickname “Robert des Ruines.” Here he incorporates ancient fluted columns and fragments of classical sculpture into an architectural fantasy of an art restorer’s studio. Most of the works depicted in the painting were real sculptures, such as the spotlighted reclining figure representing the Nile River and the standing figure of the philosopher Zeno of Elea. They would have been well known to the educated of the day.

A romance is amusingly conducted in the cavernous space as a young man on a ladder balances precariously while stretching to hand a bouquet of flowers to a woman leaning out of a window. The clandestine but pure nature of their courtship is subtly commented on by the sculpture of the mythological secret lovers Cupid and Psyche in the shadows below them.

This work is currently on view in Gallery 27 at the Toledo Museum of Art.