Nov. 18 Art Minute: Duke Riley, Those Who Are About to Die Salute You (Morutori Te Selutant) 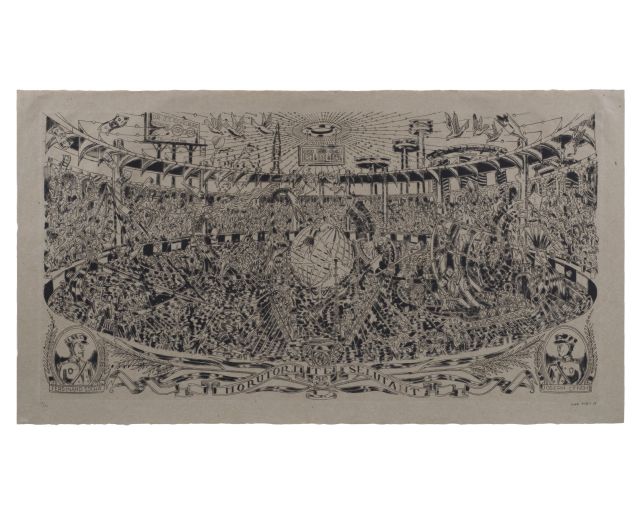 Duke Riley (American, born 1972), Those Who Are About to Die Salute You (Morutori Te Selutant). Laser cut engraving and drypoint on Phragmites handmade paper, 2009. Gift of Doug Barr, 2009.396

The highly detailed engraving re-imagines an ancient form of public entertainment, the Roman naumachia, or staged naval battle, as a modern-day sporting event held at Corona Park, the site of both the 1939 and 1964 New York World's Fair. Duke Riley's extensive body of work consists of large-scale, scrimshaw-style allegories that weave together maritime history and myths with contemporary events. This example, commemorating Riley's live staging of a naumachia, emphasizes the extravagances of modern-day consumer culture and political corruption. It is printed on paper made from reeds that Riley harvested from Corona Park, where the performance to place.

Beneath a digital scoreboard, elaborate boats and Roman soldiers do battle around the Unisphere, a giant sculpture of the Earth commissioned for the 1964 World's Fair. Money, bottles, and desserts shower the packed stadium in a show of excess that contradicts the economic decline of the 2008 Great Recession, during which Riley created this work. In the lower corners are portraits of two New York City Police detectives who were killed while diffusing a bomb on the fairgrounds in 1940. These solemn portraits and the print's title serve as reminders that mass spectacles have long been deployed by governments–both ancient and contemporary–as momentary divers from pressing societal issues.

This work is currently on view in the exhibition Global Conversations: Art in Dialogue.