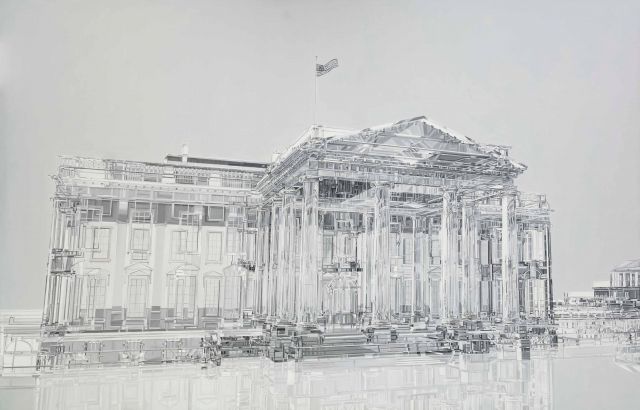 In his meticulously crafted paintings, Donis Dayán Llago often depicts global landmarks rendered in transparent 'skin'. His images raise compelling questions about the nature of authority and power and the potential fragility of institutions that loom larger than life in the public's imagination. In this pointed work, Llago has chosen an image of the White House in Washington, DC–a symbol of American power recognized around the world. Shown as semi-transparent, at an unexpected angle, it appears almost as if made of glass, suggesting an ironic critique of governmental transparency and freedom of information.

Well-known in the visual arts scene in his native Cuba, Llago received his artistic training in Havana at the Art Instructors' School and the San Alejandro National Academy of Fine Arts.

This work is currently on view in the exhibition Global Conversations: Art in Dialogue.