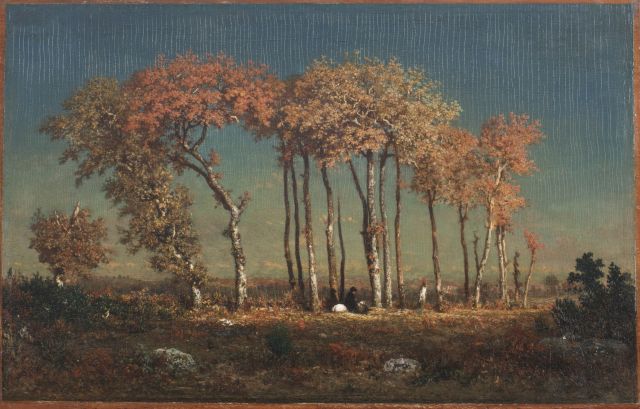 The majestic trees and extraordinary light of this painting are hallmarks of Théodore Rousseau’s landscapes. A partially obscured parish priest travels on horseback along a country lane through the late October countryside, lit by the last rays of the setting sun. Rousseau captures this fading light as a fiery glow igniting the colors of autumn.

Rousseau was the leader of a group of artists known as the Barbizon School, named for the village in the forest of Fontainebleau south of Paris where they often painted. Rousseau drew his inspiration from 17th-century Dutch landscape paintings and especially from the study of nature itself. He and the other Barbizon painters, such as Diaz de la Peña and Corot, believed in painting outside to capture the immediacy of nature, a practice later taken up by the Impressionists. Rousseau did not strictly record what he saw, however. With his paintings he sought to penetrate the mysteries of nature and to communicate his own emotional experiences of it.

This work is currently on view in Gallery 31.