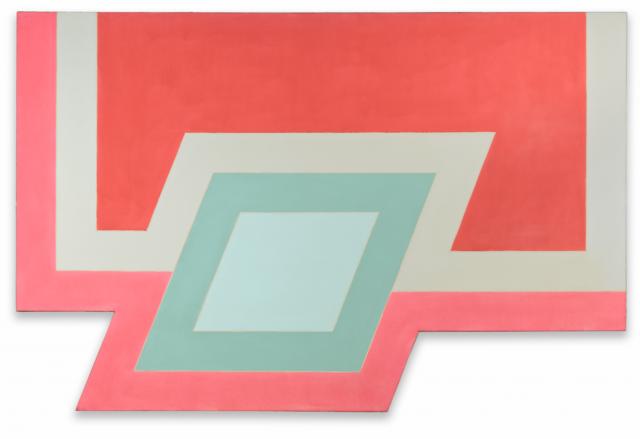 Frank Stella (American, born 1936) Conway I. Fluorescent alkyd and epoxy paints on canvas, 1966. The 2019 TMA Board of Directors recognizes this work in honor of Director Brian Kennedy and his efforts to both develop strengths and expand directions in the permanent collection. Purchased with funds from the Florence Scott Libbey Bequest in Memory of her Father, Maurice A. Scott and Purchased with funds from the Libbey Endowment, Gift of Edward Drummond Libbey, by exchange, 2012.99.

"Painting does not want to be confined—it needs room to move and breathe."

A notch at Conway in the White Mountains of New Hampshire was a favorite fishing place for Frank Stella while on childhood vacations with his father. In the painting named for this location, a parallelogram is locked into and support¬ing a rectangle, creating a diagonal, left-to-right movement.

Conway I belongs to Stella’s Irregular Polygons series of 1965–66, a startlingly dramatic and original body of work. Each of the 11 compositions combines varying numbers of shapes to create daringly irregular outlines. Stella made four versions of each composition, altering their color combinations. These asym¬metrical canvases play with illusion, confronting Stella’s previous emphasis on flatness, while anticipating his career-long exploration of space and volume in both painting and sculpture.

An eight-inch-wide stripe used as an outline wraps around the base and left side, but does not extend into the interior. There, another band of a different color completes the border around the parallelogram. This causes the shape to appear to swivel (Stella indeed said he was inspired by a swiveling mirror in his mother’s bedroom).

This work is currently on view in the Wolfe Gallery.