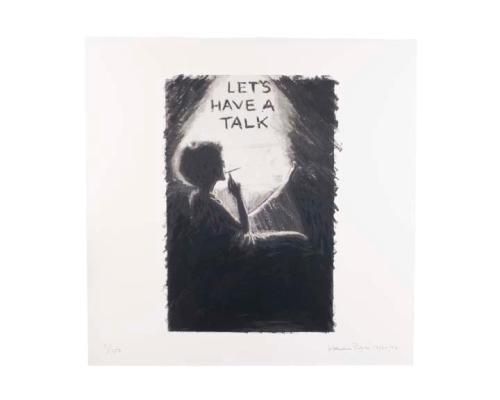 Let's Talk from "10: Artist as Catalyst" by artist Adrian Piper

Adrian Piper’s screenprint relates to her pioneering series of performances and photo-based works called The Mythic Being. From 1973 to 1975 Piper disguised herself as a working-class black man in an afro wig, round sunglasses, and fake moustache as she walked the streets of New York City reciting passages from her teenage journal. She documented these public performances and subsequent appearances of her alter ego, the “Mythic Being,” through a series of photographs, newspaper ads, drawings, and videos.

Let’s Talk—re-issued as a screenprint in 1992 for the Alternative Museum’s portfolio 10: Artist as Catalyst—belongs to one such earlier series, composed of 6 altered black-and-white photographs of a seated figure smoking a cigarette with accompanying captions that read in full: “Let’s have a talk / to bring us closer / as close friends do: / come nearer; may I stroke your back?” As an example of Piper’s larger conceptual-based artistic practice, this image concerns the power of stereotypes and how outwardly visible markers of identity (such as skin color and hairstyle) impact others’ perceptions of our character. With its open-ended use of text and image, it directly addresses the viewer’s insecurities and biases and challenges us to contemplate our own response to Piper’s Mythic Being.