In 2001, a donor gave the Toledo Museum of Art four lushly hand illustrated leaves (pages) from a 14th century manuscript on the rules associated with Catholic charity work titled the Statues of the Scuola de S. Maria della Valverde della la Misericordia. The donor’s deceased husband had purchased the leaves in Italy in the mid-20th century.

Unknown to TMA, in 2012, scholar Lyle Humphrey published an essay in Italian called “The Lost 1392 Mariegola of the Scuola di Santa Maria della Misericordia o della Valverde, Rediscovered,” where she claimed that the manuscript was stolen from the Venice State Archive in the late 1940s, then dismantled and the leaves rebound for resale purposes. In 2014, after receiving press inquires on the matter, the Boston Public Library contacted TMA with elaborate provenance research they had conducted on the manuscript and the leaves residing in its collection.

The Boston Public Library had been in contact with Dr. Raffaele Santoro, Director of the State Archive, who provided documentation of the manuscript theft to them. TMA then contacted Santoro for this concrete evidence as an act of due diligence in both 2014 and 2015. He responded to the latter request with three documents detailing the manuscript’s ownership history and theft in 1949.

Due to the conclusive proof provided by Santoro, it was proposed that the four manuscript leaves be formally deaccessioned, removed from the permanent collection, and returned to the Venice State Archive. This proposal was accepted by TMA’s Art Committee and the leaves were officially deaccessioned on May 26, 2015. The leaves were shipped to Italy on July 15, 2015 and confirmation of their receipt was received on August 7, 2015 along with thanks to the Museum for its competence and cooperation. 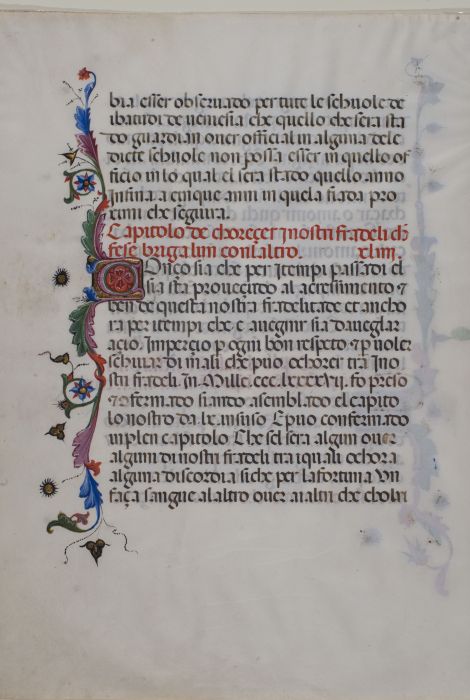