Toledo Museum of Art to Return Scientific Instrument to Germany

A lavishly-designed, 16th century scientific instrument will be returned to Germany in March 2015.

The 450-year-old astrological compendium or astrolabe was a multifunctional device used to tell time and make astronomical calculations less than 50 years after Ferdinand Magellan’s expedition circumnavigated the globe by sea for the first time. The astrolabe was manufactured in Germany and part of the Gotha Museum’s collection until it went missing in the period after World War II.

The Toledo Museum of Art purchased the device in 1954 for $6,500. Museum authorities received a letter from the director of the Gotha Museum in 2013 requesting its return. The Gotha Museum had extensive documentation, including photographs, which convinced TMA officials that the Toledo astrolabe was the same one missing since 1945.

In appreciation of the Toledo Museum of Art’s cooperation on this matter, Gotha Museum officials have offered objects to Toledo as part of a cultural exchange. The exact terms of that exchange have not been finalized at this time. There will be no public transfer ceremony as the arrangements have been handled privately between the two museums.

Funding Source: Purchased with funds from the Florence Scott Libbey Bequest in Memory of her Father, Maurice A. Scott.

Purpose of the object:

The object is a scientific instrument identified as an Astronomical Compendium. Astronomical compendia are a collection of different, small sized instruments in one box. They provided the user with a multitude of options in a handy format, but were also very expensive items which were clearly meant to show off the owner’s wealth, knowledge, and intellect. They were made as special order, reflecting the patron’s desire. The cover served as a sun dial telling time and season according to the position of the planets (the pointer-guide is missing, the string forms the shadow). The interior also includes a map of the known world; a plumb-bob could be attached to the center to calculate the angle of inclination; a wind rose and compass is engraved on one of the interior sections, the central weather vane now missing; a lunary, an instrument calculating the time according to aspects of the moon; a perpetual calendar giving the names of the principle saints; a zodiac showing which signs govern the months and days. The entire instrument could be suspended from a swiveled eye. 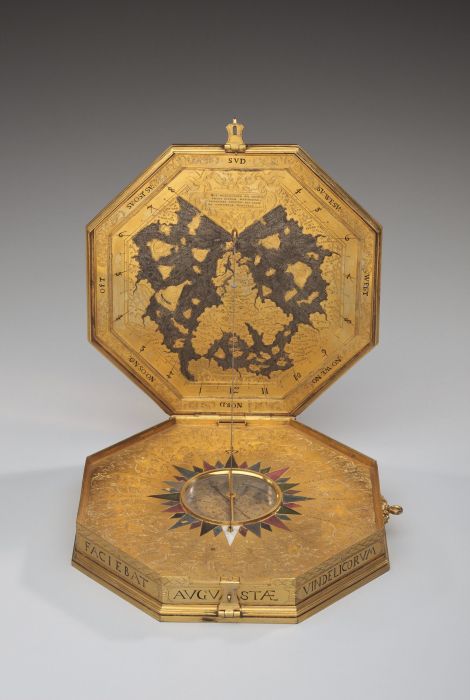