One of the Toledo Museum of Art’s best kept secrets, the Works on Paper collection includes nearly 13,000 prints, drawings, photographs, and artists’ books. The museum’s broad and diverse collection includes works from as early as the 13th century, represented by a fully intact Chinese scroll, to the present. It is particularly strong in 16th – 18th century Old Master prints, 19th century French printmaking, 20th century Japanese woodblock prints, and Modern and Contemporary artists’ books. The museum’s holdings continue to expand through generous gifts and significant purchases, notably in the areas of 20th-century and contemporary works on paper.

Though only a small portion are on display at any given time, nearly all are available to the public upon request by appointment in the Grace J. Hitchcock Works on Paper Study Room. Due to construction, we are unable to accommodate works on paper collection viewing appointments at this time. The closure is in effect through January 3, 2023. For special requests, contact Nate Coryell at 419-255-8000 ext. 7374 or ncoryell@toledomuseum.org.

Works on Paper in the TMA Collection

What is a Work on Paper?

‘Works on paper’ is a broad term that today includes any artwork that uses paper as its support. Some media such as prints, artists’ books and photographs often exist in ‘multiples’, that is, they are created as one or more identical copies. Others such as drawings, watercolors, collages, and monotypes are one-of-a-kind or unique.

Key to understanding your collection is knowing the right questions to ask. To get you started, here is a list that will assist in your identification and research of a work on paper. It may take some detective work, but what you learn can be extremely rewarding and further your enjoyment of your art.

Once you have answered as many of these questions as you can, a public library can assist you with more specific research and direct you to helpful books and other resources. Additionally, the Toledo Museum of Art Reference Library and its staff is available to help visitors conduct research.

How to care for Works on Paper

In order to get the most enjoyment from your work and retain its value, it is important to care for it properly. Below are some excellent resources.

A consortium of regional conservation centers.

How much is it worth?

There are many factors that determine a work’s value, including its condition, provenance, and personal taste and trends in the market. You may want to consult online price guides such as Gordon’s Print Price Annual and auction catalogues to obtain an approximate value.

As a matter of policy, the Toledo Museum of Art is not permitted to authenticate works of art or make recommendations for local appraisers, dealers or galleries. However, the following online sites, societies and organizations can further assist in appraising your artwork:

Below is a small selection of resources and handbooks to further acquaint you with works on paper and your knowledge of their different techniques and processes.

A companion reference guide to Looking at Photographs (see below), this portable glossary features color illustrations and provides definitions and descriptions of the most commonly used technical terms related to these three media. Directed to the enthusiastic student or collector of art.

An illustrated glossary of photographic terms and techniques from the earliest processes to the most recent digital technology. An invaluable resource for those wishing to increase their understanding of photography and the history of this evolving medium.

A highly accessible account of the changing technology of picture-making from the Renaissance to the present with a special emphasis upon photographic processes since its invention. Particularly strong on the overlap between printmaking and photography processes and digital inventions of our time.

3. Gascoigne, Bamber. How to Identify Prints: A Complete Guide to mechanical processes from woodcut to inkjet. NY: Thames and Hudson, 4th edition, 2004.

An invaluable resource for identifying a number of different print techniques. This guide is an excellent tool for understanding processes through the assistance of clear descriptions accompanied by enlarged details. Essential for the print connoisseur.

An excellent introduction to the different printmaking techniques with helpful illustrations of details to demonstrate the effects that can be achieved. Woodcuts, engraving, etching, mezzotint, and lithography are among the many processes explained, illustrated, and placed within a historical context. Also provides a useful glossary.

First published in 1943, considered the classic for the identification of various types of prints and the techniques involved in producing them.

A comprehensive history of the printmaking in the western world from its origins in the fifteenth through the late twentieth century with illustrations and bibliography for further research. Invaluable for both the serious print collector and student.

The exhibition Telling Stories: Resilience and Struggle in Contemporary Narrative Drawing showcases the extraordinary vitality of contemporary drawing as an expressive medium as presented through the works of Amy Cutler, Robyn O’Neil, and Annie Pootoogook. Utilizing inventive mark-making systems and a singular approach to rendering space, these three internationally recognized artists produce imaginative, open-ended narratives that chronicle the complexities of human relationships and their struggles within the natural environment. Though their stylistic approaches differ, the theme of human resilience intertwined with pressing societal and ecological concerns is a central focus for each artist.

The Bauhaus Experiment: Art & Design from the Toledo Museum of Art

Of world renown, the Bauhaus (“House of Building”) is widely regarded as the most influential German art, design, and architecture school of the 20th century. In its brief but remarkable existence from its founding in 1919 to its forced closure by the Nazi regime in 1933, the Bauhaus’s groundbreaking role in the development of Modernist art and architecture, contributions to art education, and innovative approach to the relationship between art, society, and technology reshaped the modern environment worldwide.

Through a selection of objects drawn from TMA’s collection, The Bauhaus Experiment presents an introduction to the school’s key ideas and methods and the significant late 19th-century and early 20th-century artistic movements that influenced it. Seeking to bring together two contradictory approaches to art and design – the reverence for hand craftsmanship and a revival of a preindustrial craft guild system – with the goal to unite art with industrial design, it maintained an uneasy relationship with the machine and technology. Paradoxically this set of contradictory goals led to its most lasting achievement: a successful language of architecture and design liberated from its dependence on past historical styles.

Invoking the rise of multicultural activism, concerns surrounding the AIDS crisis, conservative social and economic policies, rapid gentrification, and increasing urban crime during this time, each artist utilizes a mixture of text and image to tackle cultural stereotypes and challenge oppressive racial characterizations. In an open-ended manner they manipulate fragmented or borrowed texts, words, and phrases related to race, combining them with photographic or invented imagery to consider the meaning and interpretation of individual identity through the overlapping perspectives of gender, race, ethnicity, and sexuality. 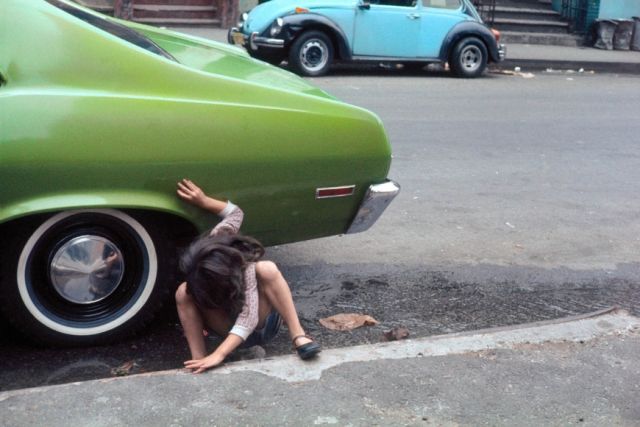 Featuring more than 100 works from the Toledo Museum of Art’s own collection and both private and public loans, Life is a Highway: American Car Culture will chart the rise of automobility as a visual icon of American identity. With works spanning from its early depiction (Walker Evans Auto Dump, 1935) through the Pop Artists’ portrayal of the automobile’s impact upon consumer culture, (James Rosenquist, Silver Skies, 1962) up to the present- day, (Richard Prince, Elvis, 2007 and Liz Cohen, Lowrider Builder & Child, 2012) the car’s image as a symbol of newness, freedom, mobility, and renewal, among other American attributes, will be explored.

Organized through four thematic focal points that call attention to the social, aesthetic, environmental and industrial dimensions of its legacy, Life is a Highway will include a range of visual media.  Providing an inclusive, historical overview with an emphasis upon the Midwest, this display brings together a diverse selection of artists to showcase the automobile’s reshaping of the 20th century American landscape and cultural attitudes of self-expression.

Widely known for her radical engagement with issues of race, gender and sexuality, Kara Walker is one of the most successful and celebrated artists today. Her print series, Harper’s Pictorial History of the Civil War (Annotated), 2005 will be on display from June 17 – October 22, 2017 in celebration of its recent acquisition by TMA. It features 15 of the artist’s signature black silhouette figures in silkscreen layered over enlarged wood-engravings of Civil War scenes taken from Harper’s Pictorial History, first published in 1866. By uniting her contemporary re-imagining of events from an African-American perspective with the historical record, Walker creates a powerful visual statement that challenges the conventional one-sided textbook account of the Civil War and the abolition of slavery.

This exhibition features a selection of modern livres d’artiste (limited edition, artist-illustrated books), and individual prints inspired by classical and mythological texts. Created largely by School of Paris artists, including Pablo Picasso, Henri Matisse, and Aristide Maillol, these innovative and original prints highlight the artist book’s importance as a vehicle to treat a range of Greek and Roman literary works written by Ovid, Virgil, and other classical poets and playwrights. Included here are antique texts that focus upon themes of love, imaginary idyllic landscapes, and human mortality, along with more recent examples modeled after ancient legends, all drawn from the Toledo Museum of Art’s collection. With their classicizing designs, these illustrated books exemplify how major artists from the late 19th and early 20th century, through their imaginative reconnection to age-old narratives and mythological figures, metaphorically assert the aesthetic and personal values of the Western classical tradition.

Color Across the Spectrum

“Color is abstract, universal—yet personal and private in experience.”

Pioneering artists since the 19th century have explored the power of color alone and its astonishing ability to produce a range of psychological, perceptual and luminous optical effects. This exhibition looks at color in printmaking through a selection of modern and contemporary graphic portfolios created by various artists, including Hans Arp, Joan Miro, Josef Albers, Barnett Newman, Julian Stanczak and Spencer Finch. In each, the interaction of brilliant color in combination with the materials of ink and paper are skillfully manipulated to create a variety of remarkable visual sensations and evocative emotional states.

Due to construction appointments to visit the Grace J. Hitchcock Works on Paper Study Room are paused through January 3, 2023