Dooley Wilson is his own peculiar latter-day bluesman, a singer/guitarist whose style and repertoire is heavily informed by - but not limited to - the folk blues & gospel tradition of Mississippi. Domiciled for most of his life in Maumee, Ohio, he has been playing blues in various formats since the early nineties, when he co-founded the obscure garage blues outfit Henry & June, whose song "Goin' Back To Memphis" was a set-ending favorite of The White Stripes and played extensively around the globe. In the ensuing years, he has been at the creative front and center of a handful of highly-regarded Toledo area bands, including The Staving Chain and Boogaloosa Prayer. These days, Wilson plays professionally as a solo artist, or as he would have it, a 'folk blues obscurity'. "I usually just tell people I play 'Delta Blues',"  he chimes, "my wheelhouse is mostly open-tuned, bottleneck guitar stylings by way of Muddy Waters, Fred McDowell, Son House,... but perhaps owing to my impatience or inability to do the scholarly note-for-note traditionalist thing, I end up sounding most identifiably like myself at the end of the day, for better or worse."

It’s Friday! Programs at the Toledo Museum of Art are supported in part by Fifth Third Bank. 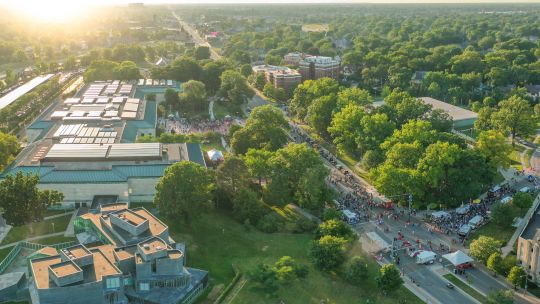